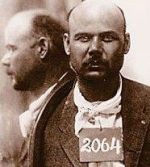 Burt Alvord (1867-after 1910), or Albert Alvord, was a lawman and later outlaw of the Old West. He began working as a deputy under Cochise County Sheriff John Slaughter in 1886, but he turned to train robbery about the beginning of the 20th century and escaped  to Central America, where he was last seen about 1910. END_OF_DOCUMENT_TOKEN_TO_BE_REPLACED

Located about 25 miles east of Pittsburg, PA, the Battle of Bushy Run Reenactment is usually held on the first weekend of August at the Bushy Run Battlefield in Jeannette, Pennsylvania. It commemorates a battle during the French and Indian war more than 250 years ago. END_OF_DOCUMENT_TOKEN_TO_BE_REPLACED

The history of Fort Ligonier in Pennsylvania began in September 1758 and was concluded in March 1766, embracing the period of the French and Indian War and Pontiac’s War. Today, the story of this time period is told through the remarkable Fort Ligonier museum exhibits and a fully reconstructed and restored fortification. A battle reenactment is held during the Fort Ligonier Days festival the second weekend in October. END_OF_DOCUMENT_TOKEN_TO_BE_REPLACED

Reinactment of the ambush of Hanna’s Town, PA

History buffs can join about 50 re-enactors the 4th weekend in June, as log cabins and taverns come alive on the Pennsylvania frontier in the waning days of the American Revolution. END_OF_DOCUMENT_TOKEN_TO_BE_REPLACED

Created to protect the area from the fierce Apache who roamed the Salt and Gila River Valleys, Fort McDowell was built to be one of the most solid posts in the territory.

It was established by the California Volunteers on the west bank of the Verde River in September, 1865.  Situated in the midst of  Indian country and surrounded by mountains, the area around this isolated location still contained several often used travel routes. END_OF_DOCUMENT_TOKEN_TO_BE_REPLACED

Fort Lowell (1862-1891) was a part of the system of forts guarding southern Arizona during the years of Apache hostilities. This one served more as a supply depot and administrative center than as a combat base.

It occupied two sites; the first of which was little more than a tent city, established in May 1862 just east of Tucson by California Volunteers who had captured the town from the Confederates. END_OF_DOCUMENT_TOKEN_TO_BE_REPLACED

Fort Grant (1872-1905) was founded along a route that was often used by Apache fleeing to Mexico from the San Carlos Reservation. Prior to the closure of old Fort Grant  (Fort Breckinridge), a site was chosen for the new fort by General George Crook.

The “new” site was at a higher elevation and was a more strategic location, situated at the foot of the southwestern slope of Mount Graham in what is now Graham County in southeast Arizona. END_OF_DOCUMENT_TOKEN_TO_BE_REPLACED

Fort Goodwin (1864-1871) was one of the first posts in the area. It was established in June, 1864 by California Volunteers to provide protection for settlers in the Gila Valley.

Located near a beautiful spring about two miles south of the Gila River, the post was named for John N. Goodwin, the first Territorial Governor of Arizona.

From the beginning, the post faired poorly due to unethical contractors, whose adobe buildings began to crumble in just a few short years. END_OF_DOCUMENT_TOKEN_TO_BE_REPLACED

Fort Defiance (1851-1861) was stablished in the Fall of 1851 by troops led by Colonel Edwin V. Sumner. The post was the first to be built within the Mexican Cession (1848) in what would become Arizona Territory.

After the failure of several treaties with the Navajo, the fort’s purpose was to “control” the restive tribe.” END_OF_DOCUMENT_TOKEN_TO_BE_REPLACED

Fort Buchanan (1856-61) supplemented a number of other military posts established in the territory acquired from Mexico in 1848.

Fort Buchanan was the first within the bounds of the Gadsden Purchase (1853).