Located about 25 miles east of Pittsburg, PA, the Battle of Bushy Run Reenactment is usually held on the first weekend of August at the Bushy Run Battlefield in Jeannette, Pennsylvania. It commemorates a battle during the French and Indian war more than 250 years ago.

The French and Indian War 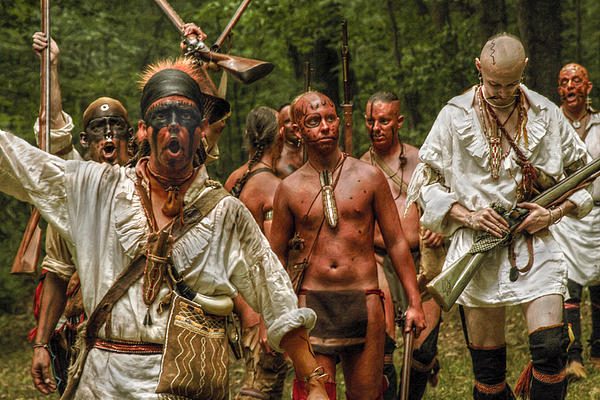 When the war ended, France was no longer in control of Canada and the Indians who had been threatening the American colonists were defeated.

Great Britain spent a great deal of money in the conflict and colonists fully participated in this war. Both these facts were to have a profound effect on the future of the colonies.

The Battle of Bushy Run

The British victory at Bushy Run was the critical turning point in Pontiac’s War. It also prevented the capture of Fort Pitt (Pittsburgh) and restored lines of communication between the frontier and eastern settlements. The British victory helped to keep the “gateway to western expansion” open.

Pontiac, an Ottawa chief in the Detroit areas, retaliated against British policies and control following the collapse of New France at the close of the French and Indian War. Because of Pontiac’s successful advances against the British, Indian revolts quickly spread eastward.

His plans were covert until 1763 when attacks on British outposts began. By the end of July, nine British forts were captured, a tenth fort abandoned, and the great strongholds of Pitt and Detroit under seige.

The geographic area affected included the present states of Pennsylvania, New York, Ohio, Indiana, Michigan, Wisconsin and parts of Maryland and West Virginia. Truly this was the greatest Indian threat to the British colonies during the 18th century.

Because the Indians so throroughly controlled the frontier, information about the war filtered slowly east to the British high command.

Once the scope of the situation was realized in late June, an expedition was organized to march west to Fort Pitt and then to proceed north and west to re-estabish fallen forts.

Colonel Henry Bouquet, a Swiss born professional soldier, commanded the expedition of about 400 British soldiers as it left Carlisle, Pennsylvania on July 18th to relieve the besieged Fort Pitt and end a series of unchecked attacks against frontier outposts.

Indian scouts observed Bouquet’s army marching west along Forbes Road and reported this to the large force of Indians surrounding Fort Pitt. The Indians decided to temporarily end their siege and attack the British expedition in the open.

The attack took place one mile east of Bushy Run Station on August 5th and 6th, 1763. The engagement resulted in a victory for the British.

The opening of western Pennsylvania to settlement was the result of a decisive victory over the Native Americans at the Battle of Bushy Run, August 5th and 6th, 1763. 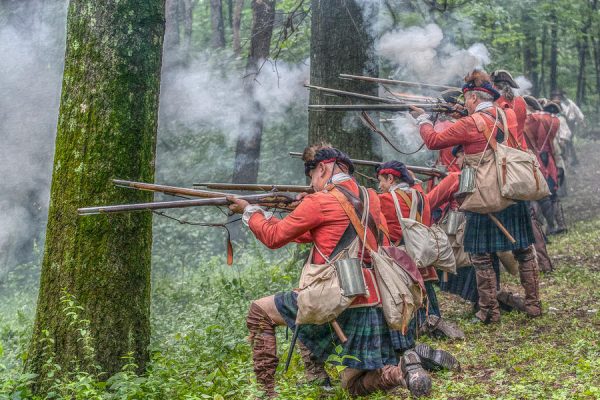 Bushy Run Battlefield is the only historic site or museum that deals exclusively with Pontiac’s War, one of the most significant Native American conflicts in American History.

The battlefield today is topographically intact. Combatants’ positions and maneuvers can be “seen” and understood and the wooded acres (90 acres) give a sense of the original environment at the time of the battle.

Self-guiding trails, guided tours and interpretive programs return visitors to the days of the battle. Interpretive exhibits located in a modern Visitor’s Center aid the visitor in understanding the significance of the events that occurred at Bushy Run.

May 3 – French troops land at the site of present-day Erie, PA, and begin construction of Fort Presqu’ Isle.

December 11 – Twenty-one-year-old Major George Washington reaches Fort LeBoeuf with a letter from Robert Dinwiddie, Governor of Virginia, claiming that the French are trespassing on British territory.

May 28 – A Virginia militia detachment under George Washington attack a small French force east of present-day Uniontown, PA. Eleven French soldiers, including their commander Ensign Villiers de Jumonville, are killed; 21 are captured, and only one French soldier escapes. Washington loses are one man killed and a few wounded out of 40 under his command. This brief encounter is considered to be the beginning of the French and Indian War.

July 4 – Washington surrenders the fort and retreats to Virginia.

July 9 – Braddock’s campaign ends in disaster at the Battle of Monongahela, eight miles east of Fort Duquesne. Nearly two-thirds of the 1,500 British troops engaged are killed or wounded, including Braddock himself, who dies during the retreat. The French and Indian force of nearly 900 suffers less than 50 casualties.

October 16 – Following Braddock’s defeat, natives begin a reign of terror on the frontier with an attack on the Penn’s Creek settlement on the Susquehanna River.

September 8 – Colonel John Armstrong leads a force of 300 Pennsylvanians on a successful raid of the Delaware village of Kittanning.

June 24 – Construction of a fort and storehouses at Raystown (Bedford) begins.

September 14 – With Bouquet’s permission, Major James Grant launches an unsuccessful attack on Fort Duquesne, losing nearly 300 troops out of 850 engaged. The French and Native Americans lose 16 out of 800.

October 26 – Lenape and Iroquois sign the Treaty of Easton with the British at Easton, PA. In the treaty, colonials recognize Native American rights to lands west of the Allegheny Mountains. Native Americans in turn promise to remain neutral in the conflict between France and England, and detach themselves from their French alliances.

November 24 – The French abandon and destroy Fort Duquesne. General Forbes and his army take formal possession of the fort the following day.

July – A large French force at Venango prepares to attack Pittsburgh when it is ordered to march to the assistance of Fort Niagara instead.

September 18 – Quebec surrenders to the British.

July 7 – Colonel Bouquet leads an expedition from Fort Pitt to Presqu’ Isle to construct a fort there. The British also build forts at Venango and LeBoeuf.

September 8 – French Canada surrenders to the British Army, ending most of the fighting between the French and the British in North America.

April 22 – Despite previous promises at Easton to the Natives that there would be no permanent settlements west of the Allegheny Mts., Bouquet asks General Jeffrey Amherst to authorize the building of taverns between Bedford and Pittsburgh.

July 4 – At a conference near Detroit, the Seneca seek Shawnee and western tribe support (Wyandot, Chippewa, Potawatomi and Ottawa) for attacks on Forts Detroit, Sandusky, LeBoeuf, Venango and Pitt. The Wyandot persuade the other tribes not to join the plot.

October 30 – Bouquet issues a proclamation forbidding hunting and settling west of the Alleghenies. The law proves to be unenforceable.

February 10 – British and French sign The Treaty of Paris, officially ending the French and Indian War.

April 27 – Pontiac, an Ottawa leader, reportedly addresses a council of Native Americans near Detroit, convincing them that a war with the British is necessary to protect their way of life.

May 16-27 – Native Americans capture the western forts of Sandusky, St. Joseph and Miami.

June 6 – Upon receiving reports from Captain Ecuyer, commander of Fort Pitt, of the disasters on the frontier, General Amherst assembles his last reserves—the 42nd and 77th Highland regiments—on Staten Island.

June 28 – The first two companies of Highlanders arrive in Carlisle.

July 8 – Pennsylvania’s Provincial Assembly authorizes the recruiting of 700 men to guard the territory east of the Allegheny Mountains.

July 28 – The natives begin the attack and siege of Fort Pitt, which lasts until August 1st.

August 2 – Bouquet’s troops reach Fort Ligonier; they rest for two days, and transfer the flour provisions for Fort Pitt from the wagon barrels they had been using to 340 packhorses.

October 7 – King George III signs the Proclamation of 1763, reserving land west of the Allegheny Mountains for the Native Americans.

August 12 – A preliminary treaty is made with the Delaware and Shawnee by Colonel Bradstreet at Presqu’ Isle.

October 3 – An army of 1,500 men, commanded by Colonel Bouquet, leaves Fort Pitt on an expedition into the Ohio Country.

October 17 – Bouquet begins several days of conferences with the Native Americans at the forks of the Muskingum River in the Ohio Country. Over 200 prisoners are turned over to him, and the natives agree to send representatives to New York to make a formal treaty. 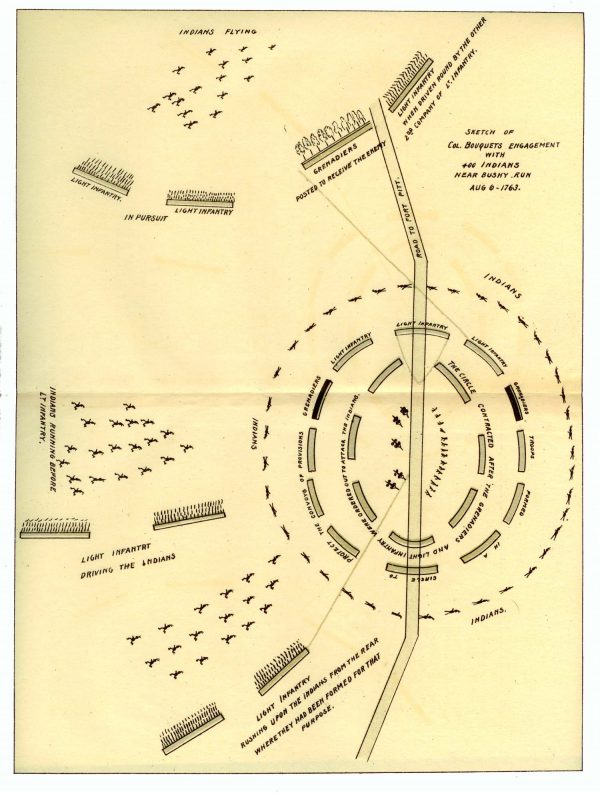 The Battle of Bushy Run Reenactment

The site of the 1763 battle between the British Army and Chief Pontiac’s Native American Confederation is a must see attraction. Visitors will first start at the visitor center, which includes a small museum that details the events leading up to Pontiac’s Rebellion with the highlight of the museum being the 13 minute long documentary Road To Bushy Run.

Afterwards, you can either take a golf cart tour that loops around the battlefield or take your own self guided tour and walk in the footsteps the men who fought 250 years ago did.

Sadly, the first day’s battleground has become barren due to a farm being located on the site at one point. Edge Hill, where the second day’s fighting occured is still preserved in the state it was during the battle.

There are numerous hiking trails that weave through the woods around Edge Hill (which provide an idea of what the 1st day’s battle ground was like).

The Battle of Bushy Run Reenactment is the premiere event for the year, pitting the forces of his Royal Highness King George III against a confederation of Native Americans.

See all the colors of war in the vibrant recreations of the two-day Battle of Bushy Run Reenactment that the various participants bring to life.

Learn about how the battle progressed as well as how people lived in the mid-eighteenth century.

If you are visiting from out of the area, there are other sites relating to Bushy Run nearby. Overall, Bushy Run Battlefield is a hidden gem in Western Pennsylvania that is a must see site. 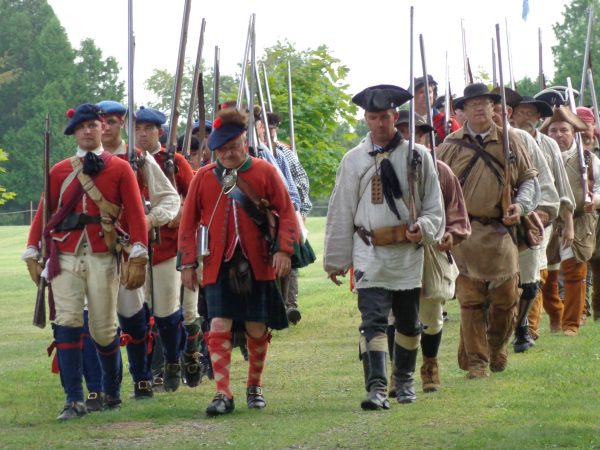 What: The Battle of Bushy Run

Reenactments: Two battle reenactments occur daily. The morning battle starts at 11 a.m. and portrays the events that occurred on August 5, while the afternoon engagement begins at 2 p.m. and shows the August 6 tactics that led to British victory.

Nearby Attractions and Events

Email  [email protected] for a registration form or more information. Note the deadline for registration submission is July 10. If you have any questions, you can also  contact the Visitor Center by calling (724) 527-5584.

Only Units or Sutlers invited by Bushy Run Battlefield Heritage Society (BRBHS) are permitted to participate.

Please note: minimum age for participant is 17 years of age to carry and use a weapon (functional or otherwise) in demonstrations or opposing force reenactment.

All reenactors must camp in their respective camp.
No facial hair is allowed for Native reenactors.
The dress and equipment of participants will be reviewed prior to each event day by a jury which will admit or deny participant to battle.
All demonstrators must specify that they are demonstrating and what they are demonstrating on their registration form.
All demonstrators who are under the age of 16 will be required to have proper release forms from Department of Labor in order to be paid.
 Parents or guardians can include children under the age of 18 on their registration form.
 All battle participants must complete the following, failure to do so may result in loss of battle privileges or stipend:
o CHECK IN UPON ARRIVAL ON FRIDAY NIGHT (before 5 pm) OR SATURDAY MORNING (after 8 am) AT MUSEUM
o CHECK IN AND SUBMIT FIREARM FOR SAFETY CHECK PRIOR TO BOTH BATTLES ON BOTH DAYS