The history of Fort Ligonier in Pennsylvania began in September 1758 and was concluded in March 1766, embracing the period of the French and Indian War and Pontiac’s War. Today, the story of this time period is told through the remarkable Fort Ligonier museum exhibits and a fully reconstructed and restored fortification. A battle reenactment is held during the Fort Ligonier Days festival the second weekend in October.

In the middle of the eighteenth century, two European powers, Great Britain and France, contested ownership of the vast inner basin of North America. The resulting conflict became known in America as the French and Indian War, which developed into a global struggle for empire later called the Seven Years’ War.

Victories over Virginia Colonel George Washington at Fort Necessity in 1754, and British General Edward Braddock at the Monongahela River in 1755, gave control of the strategic forks of the Ohio River (modern Pittsburgh) to the French. This site was the gateway to the west.

In 1758, William Pitt, British secretary of state for the southern department, assigned to John Forbes, a Scottish brigadier general in America, the task of securing the backcountry, which meant seizing Fort Duquesne, the French post at the forks.

Forbes demonstrated the care that military professionals used to protect an army proceeding through enemy country, by favoring a European strategy called the “protected advance.”

A deliberate, careful march across hostile territory was advised, consolidating advances by building posts and supply depots. Fort Ligonier was the final post on the Forbes Road and the staging area in southwestern Pennsylvania to attack Fort Duquesne.

The most elaborate fortification undertaken in Forbes’s expedition was Fort Ligonier, “The Post at Loyalhanna.”

By 1758, General John Forbes was assigned the daunting task of seizing Fort Duquesne, the French citadel at the forks. He ordered construction of a new road across Pennsylvania, guarded by a chain of fortifications, the final link being the “Post at Loyalhanna”, fifty miles from his objective, to serve as a supply depot and staging area for a British-American army of 5000 troops.

The fort was constructed in September 1758. By late October, Washington had arrived at Loyalhanna, but not before the defeat of a British force at Fort Duquesne on September 14, and the successful defense of Loyalhanna from a French attack on October 12.

The Reign of Fort Ligonier

During the eight years of its existence as a garrison, Fort Ligonier was never taken by an enemy. It served as a post of passage to the new Fort Pitt, and during Pontiac’s War of 1763. It was a vital link in the British communication and supply lines.

It was attacked twice and besieged by the Native Americans, prior to the decisive victory at Bushy Run in August of that year. In March 1766, Arthur St. Clair was appointed civil caretaker, and Fort Ligonier was decommissioned from active service.

The People of Fort Ligonier

Several distinct types of armed fighting men served the British Crown during the French and Indian War and were present at Fort Ligonier. The King’s regulars were raised in the British Isles and paid by the Crown, although colonists also enlisted in the regular army.

Provincial troops consisted of volunteers recruited, equipped and paid by individual colonies. At Fort Ligonier, these troops were from Pennsylvania and Virginia, with detachments from the “Lower Counties” (now Delaware), Maryland and North Carolina. Local militia served at the fort in 1763.

Commissioned officers formed a close elite group separated by a wide gulf from the other ranks, or enlisted men, who held a position something like that of tenants. Standing between the two was a distinct class of managers: sergeants and corporals, who enforced work and discipline.

Officers were entitled to extra rations to provide for guests and, for field officers, aids and staff. Young men purchased commissions in the British army, and promotion required seniority, merit, additional purchases and, often, a friend in power.

Colonels of standing regiments were appointed by the King. Officers could receive special rank during service abroad. Forbes was commissioned a brigadier general “in America only”.

The Reconstruction of Fort Ligonier 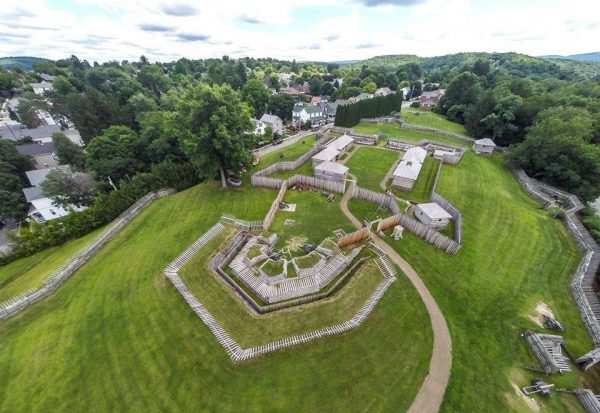 Eight acres of the original site of Fort Ligonier have been preserved, with the subsurface features restored and the above-ground elements reconstructed on a commanding hilltop in the beautiful Laurel Highlands.

The inner fort is 200 feet square, defended by four bastions and accessed by three gates. Inside is the officers’ mess, barracks, quartermaster, guardroom, underground magazine, commissary, and officers’ quarters. Immediately outside the fort is General Forbes’s hut.

An outer retrenchment, 1,600 feet long, surrounds the fort. Other external buildings include the Pennsylvania hospital (two wards and a surgeon’s hut), a smokehouse, a saw mill, bake ovens, a log dwelling and a forge.

Visit Fort Ligonier during Fort Ligonier Days to view the impressive commemoration of the Battle of Fort Ligonier, a key engagement of the French and Indian War, fought on October 12, 1758.

You will see dramatic artillery demonstrations, watch the battle reenactments twice a day on Saturday and Sunday, and listen to riveting narration of the events.

Smell the wood smoke from the reenactors campfires and gunpowder from the artillery demonstrations and battle reenactments. Visitors can interact with costumed interpreters who represent the different perspectives of the French and Indian War (1754-1763) – British, French, and American Indians.

ADMISSION: Regular admission fees at Fort Ligonier apply throughout Fort Ligonier Days. Admission tickets are Adults $10; Youth (6-17) $6; Children 5 and under get in free. (Prices effective as of 2017.)

PARKING: Parking is not available at Fort Ligonier during Fort Ligonier Days. Please follow signs to the official parking areas ($10.00 parking fee per vehicle per day). Shuttle buses are available from the parking lots to town. Fort Ligonier is located within one block of the Diamond and adjacent to the Loyalhanna Craft Lot.

Shuttle Buses Pick Up and Drop Off Sites: 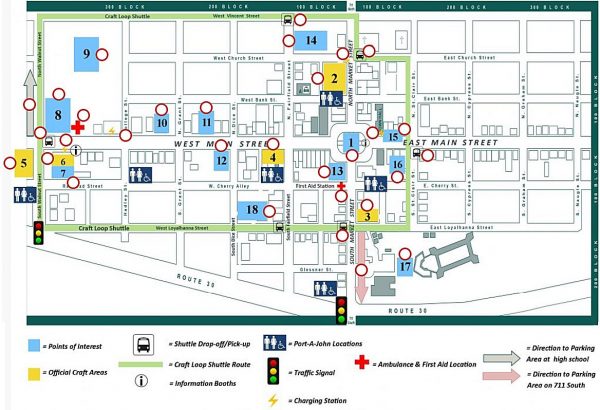 Area: 1 – The Diamond Area. More than 30 food booths, live entertainment on the Bandstand, and an information booth located on the East side of the Diamond.

Area: 11 – Pioneer Presbyterian Church will have food and beverages available.

Area: 12 – Wine Tasting Event on the Lawn of Thistledown at Seger House – ID Required. Must be 21 or over to sample or purchase wine. Handicap accessible port-a-johns located here.

Area: 16 – Mommy Gear is the location of a baby feeding and changing station.

Area: 17 – Fort Ligonier is the site of the French and Indian War Battle of 1758. Artillery demonstrations and battle re-enactments planned for Saturday and Sunday afternoons.

Area: 18 – Ramada of Ligonier. ID Required. Bud Light Tent featuring food and beverages will be open Friday and Saturday in the parking area behind the hotel.

First Aid Station – Located in the basement of the Heritage United Methodist Church.

Charging Stations can be found at:

N. Market Street
By a lamppost toward the end of the block
Across from the Allegheny Health Network Van

Living history participation is by invitation only and advance registration is required. For more information, please contact Fort Ligonier at [email protected]

Crafters and artisans interested in participating in one of Fort Ligonier Days Official Craft Lots should contact the Ligonier Valley Chamber of Commerce at [email protected] or 724-238-4200.

Nearby Historical Sites and Attractions