Horse armor was harder to make for horses than it was for humans. Armor for horses was necessary because enemies attacked horses as a way to slow their riders down.

END_OF_DOCUMENT_TOKEN_TO_BE_REPLACED

Should Ronald Regan replace Ulysses S. Grant on the $50 bill?

Ronald Regan deserves posterity’s honor, and so it makes sense that the capital’s airport and a major building there are named for him. But the proposal to substitute his image for that of Ulysses S. Grant on the $50 bill is a travesty that would dishonor the nation’s bedrock principles of union, freedom and equality – and damage its historical identity.

END_OF_DOCUMENT_TOKEN_TO_BE_REPLACED

During the late 1850s prospectors discovered the first significant Montana gold strike at Benatsee Creek, north of the Deer Lodge Valley; by the turn of the century thriving boomtowns were scattered throughout the state. When the gold disappeared, so did the people. What remains of the once wild and roaring mining camps are a number of historic Ghost Towns. END_OF_DOCUMENT_TOKEN_TO_BE_REPLACED

Experience living history at its best with approximately 125 tents and teepees set up for this annual Western heritage event. Spend the weekend at Woolaroc in Bartlesville and join participants from all over the United States as they recreate the rugged pioneer life of the men and women who trapped and traded throughout 1820s to 1840s-era Indian Territory. END_OF_DOCUMENT_TOKEN_TO_BE_REPLACED 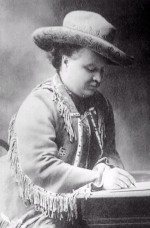 Gordon William Lillie was born February 14, 1860, to Susan and Newton Lillie in Bloomington, Illinois. Newton Lillie owned and operated a flour mill and was considered one of the prosperous citizens of Bloomington.

Gordon, the oldest of four children (siblings Lena, Effie, and Albert), worked in the flour mill after school and on weekends. Gordon spent his free time reading dime novels about the Old West and Buffalo Bill. END_OF_DOCUMENT_TOKEN_TO_BE_REPLACED

Most of the “Wild West Shows” did not include the word “show” in their name since the term indicated that the performers were simply acting. Terms like “exposition” or “exhibition” were commonly used to indicate that the spectacles were authentic ethnographic examples of people from the true Wild West. END_OF_DOCUMENT_TOKEN_TO_BE_REPLACED 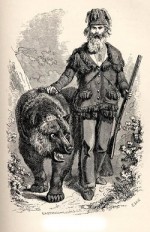 Born in Massachusetts on October 12, 1812, Adams first worked as a shoemaker before becoming a hunter in New England’s forests. When gold was discovered in California in 1858, Adams, along with thousands of others, made his way west.

The buckskin clad trapper became a well-known figure when he took his bears to New York City and later became involved in P.T. Barnum’s Circus.
END_OF_DOCUMENT_TOKEN_TO_BE_REPLACED

James Beckwourth and the Crow Indians

About 1828, while on a trapping expedition with Jim Bridger, James Beckwourth was supposedly captured by a party of Crow warriors. By Beckwourth’s account, he was mistaken for the long lost son of Big Bowl, one of the tribal chieftans, and adopted into the tribe. END_OF_DOCUMENT_TOKEN_TO_BE_REPLACED 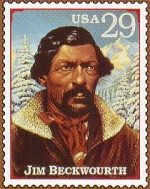 Jim Beckwourth was an African American who played a major role in the early exploration and settlement of the American West. He was an American mountain man, fur trader, and explorer. END_OF_DOCUMENT_TOKEN_TO_BE_REPLACED