Billy the Kid was an outlaw who became a legend in the Wild West. While  his real name was actually Henry McCarty, at different times he was known by aliases such as Billy Antrim, Henry Antrim, Kid Antrim, Billy Bonney, William H. Bonney, and the most famous, Billy the Kid. 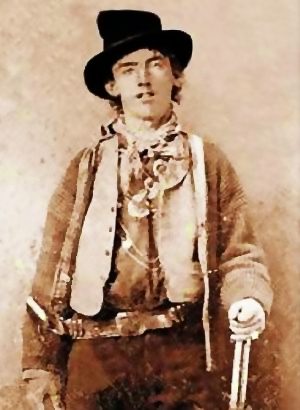 It has not been satisfactorily documented when and where he was born, although it has been established that his actual name was Henry McCarty.

In 1880 in Fort Sumner, New Mexico, Henry McCarty told a federal census taker that he was twenty-five years old, that both of his parents had been born in Missouri, and that he too had been born there. There is no reason to believe he was lying.

It can be documented that in 1866 he was living in Marion County, Indiana, with his mother, Catherine McCarty, and his elder brother, Joseph McCarty.

Catherine McCarty suffered from tuberculosis, and this may have prompted her to move farther west. In 1873 Billy’s mother married William H. Antrim in Santa Fe, New Mexico.

Shortly after his mother’s death in 1874, he took to wandering and spent two years as a general laborer, cowboy, and teamster in eastern Arizona.

Only four killings credited to Billy the Kid can be documented. 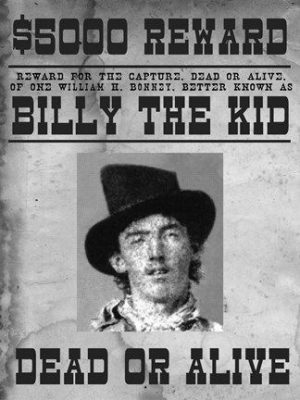 The first occurred in 1877 at Camp Grant, Arizona, when Billy shot and killed Frank “Windy” Cahill after an argument. The Kid was found guilty of “criminal and unjustifiable” shooting, but he escaped from custody and returned to New Mexico.

The Kid’s other killings resulted from his involvement in the Lincoln County War, a deadly feud involving local merchant and cattle interests. On one side stood Scottish lawyer Alexander McSween and John H. Tunstall, an Englishman who owned a cattle ranch in Lincoln County.

On the other were James Dolan and Lawrence Murphy, merchants in the town of Lincoln. In January 1878 the Kid was working for Tunstall. When Tunstall was murdered by the Murphy- Dolan faction, the Kid and other Tunstall- McSween allies declared themselves “Regulators” and sought revenge.

For the next year bloody retaliatory warfare was waged between the two factions. In early March the Regulators arrested and then killed Dolan associates Frank Baker and Billy Morton, reportedly while the pair were trying to escape.

At that point, territorial governor John Axtell declared the Regulators outlaws; after that they were hunted. On April 1, 1878, when Sheriff William Brady and Deputy George Hindman, both Dolan allies, tried to ambush McSween, the Regulators fought back and killed the lawmen.

Five day shoot out in Lincoln

Billy the Kid with his guns

Roberts and Dick Brewer, a Regulator, were killed in the gunfight. The decisive battle of the Lincoln County War was fought during a five-day shoot-out in Lincoln in July 1878.

Sniping went on for four days, with the Regulators trapped inside McSween’s house.

On the fifth day, after the ineffective U.S. Army arrived, McSween’s home was set on fire, and Billy the Kid led a rush out of the burning house.

The Kid managed to escape, but McSween and several others were riddled with bullets. Along with what was left of the Regulators, the Kid was outlawed for good.

In December 1880, the newly elected sheriff of Lincoln County, Pat Garrett, and other lawmen captured the Kid at Stinking Springs.

There were two federal indictments open against Billy the Kid. The first was for killing Buckshot Roberts, the second was for the death of a clerk on the Mescalero reservation.

The prosecution decided that both of these charges would probably result in acquittal, so it was decided to try the Kid for the murder of Sheriff Brady.

Billy the Kid was found guilty and sentenced to hang, but he escaped on April 28, 1881, after killing two guards.

He was finally shot to death on the night of July 14, 1881 by Pat Garrett during an ambush at old Fort Sumner.

Hundreds of books, motion pictures, radio programs, television programs, and even a ballet have subsequently been inspired by the legend of Billy the Kid.

Billy the Kid probably killed only four men, generally in circumstances that might be conceived of as self defense, and who was unfortunate enough to find himself on the losing side in a mercantile war.