William F. “Buffalo Bill” Cody was born just west of the Mississippi River near LeClaire, Iowa, on February 26, 1846. By the end of his life, he had come to symbolize the American frontier itself.

Buffalo Bill Cody, Public Domain PhotoAt age 12, he worked for a wagon train headed to Fort Laramie, Wyoming; the next year, he participated in the gold rush to Colorado; and at 15, he reportedly rode for the Pony Express.

Cody served as a scout for the Union Army’s Seventh Kansas Cavalry during the last years of the American Civil War.

In 1867, Cody hunted buffalo for the Kansas Pacific Railroad work crews, earning his moniker “Buffalo Bill” and his reputation as an expert shot.

The next year, he was employed by the U.S. Army as a civilian scout and guide for the Fifth Cavalry. His experience and skills as a plainsman made him an invaluable tracker and fighter.

On April 26, 1872, Cody became one of only four civilian scouts to be awarded the U.S. Congressional Medal of Honor during the Indian Wars for valor in action. (He was later declared ineligible for the medal and stricken from the roll in 1917, but his name was reinstated in 1989 by the Army Board for Correction of Military Records.) 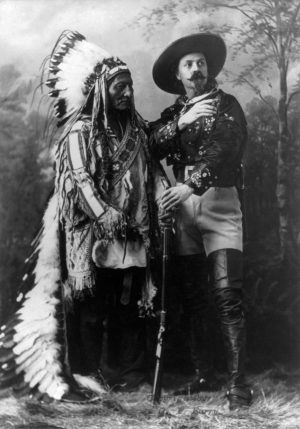 U.S. Army General Philip Sheridan saw in Cody a combination of charisma and frontier know-how—a natural “public relations windfall” for the Army of the West, which was in need of some good publicity.


Under the protection of the Army, visiting dignitaries, such as the Grand Duke Alexis of Russia, took lavish hunting expeditions accompanied by General Sheridan and Brevet Major General George Armstrong Custer with Buffalo Bill as their guide.

These excursions were full-scale media events, glamorizing both the military and Cody.

During this time, the pulp fiction industry produced inexpensive magazines that romanticized the exploits of the heroes and villains who roamed the plains—including Buffalo Bill, a central figure of many of these inflated truths.

The birth of the Wild West Show

In 1872, dime novel writer Ned Buntline persuaded Cody to portray himself on stage. The “show business bug” hit Cody, and he formed his own “combination” troupe the next year.

During the height of the Plains Indians resistance to white settlement, Cody returned to the prairies in summer 1876 to scout for the Fifth Army. On July 17, 1876, just three weeks after Custer and the Seventh Cavalry were defeated at the Battle of Little Big Horn, Cody’s regiment intercepted a band of Cheyenne warriors.

When Buffalo Bill, in his stage clothing, killed and scalped a Cheyenne warrior named Yellow Hair (often mistranslated “Yellow Hand”), he reportedly cried out “First scalp for Custer!” Buffalo Bill the frontiersman had proved that Buffalo Bill the character was no mere actor.

The “Great Showman” and Entrepreneur

In 1883, Cody created what would become Buffalo Bill’s Wild West, a grand performance that propelled him to fortune and worldwide fame. The Wild West was staged, in one form or another, for thirty years, playing to enthusiastic crowds throughout the United States and Europe.


In Europe, Cody was called “Nature’s Nobleman” because he was someone who had grown up on the frontier yet represented all of those best aspects of civilization.

Despite his characterization as a figure from the past, Buffalo Bill always looked to the future. As a businessman, he invested in projects that he hoped might bring economic growth to the West.

With his earnings, he invested in an Arizona mine, hotels in Sheridan and Cody, Wyoming, stock breeding, ranching, coal and oil development, film making, town building, tourism, and publishing.

In 1899, he established his own newspaper, the Cody Enterprise, which is still the main source of news for the town of Cody today. Taking advantage of his celebrity status, Cody was an early advocate of women’s suffrage and the fair treatment of American Indians.

The most famous American in the world

By the turn of the twentieth century, William F. Cody was arguably the most famous American in the world. No one symbolized the West for Americans and Europeans better than Buffalo Bill.

Every American president from Ulysses S. Grant to Woodrow Wilson consulted him on matters affecting the American West. He counted among his friends such artists and writers as Frederic Remington and Mark Twain.

He was honored by royalty, praised by military leaders, and feted by business tycoons. Cody was America’s ideal man: a courtly, chivalrous, self-made fellow who could shoot a gun and charm a crowd.

Yet as Annie Oakley put it, “He was the simplest of men, as comfortable with cowboys as with kings.”