Horse armor was harder to make for horses than it was for humans. Armor for horses was necessary because enemies attacked horses as a way to slow their riders down.

Horse armor was as expensive and time consuming to make as human’s armor. Barding was another word for horse armor.

Each piece of armor has its own name. The champron was designed to protect the horse’s face. It extended from the horse’s ears to its muzzle ,with flanges to cover its eyes. The criniere was a set of metal pieces that covered the neck of a horse. These pieces connected to the champron.

A horse’s hindquarters were covered by a croupier. This piece was typically made of leather, chain, or plate. Boiled leather was a common material for horse armor, but plate metal was much more protective.

The flanchard covered the horse’s flank and was attached to the side of the saddle, then around the front or rear of the horse and then to the saddle again. Usually, the flanchard was made of metal plates riveted to leather. Sometimes there was an opening for a rider to use spurs.

A petral was also attached to the saddle, protecting the horse’s chest. Horses were also covered in caparisons, which were like long robes made of cloth.

There was also a form of protection for the horse’s reins. Thin metal plates were riveted to the leather to prevent the reins from being cut. 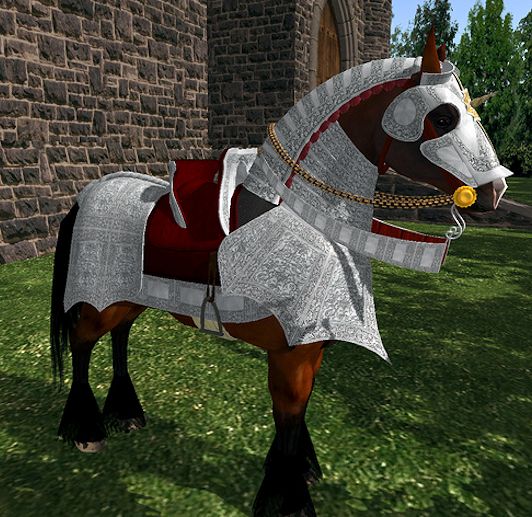