During the late 1850s prospectors discovered the first significant Montana gold strike at Benatsee Creek, north of the Deer Lodge Valley; by the turn of the century thriving boomtowns were scattered throughout the state. When the gold disappeared, so did the people. What remains of the once wild and roaring mining camps are a number of historic Ghost Towns. 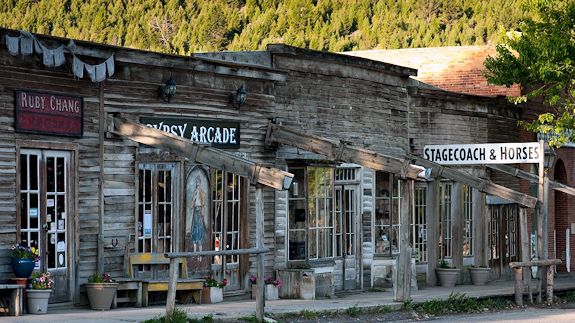 Bannack State Park is a registered historic landmark and the site of Montana’s first major gold discovery on July 28, 1862. There are over 50 buildings that line Main Street with their historic log and frame structures. Bannack is unique in that all the buildings are well preserved, not buildings that have been restored to their historic state.

The road between Bannack and Virginia City was the scene of more holdups, robberies and murders than almost any other comparable stagecoach route. The outlaw gang had Henry Plummer, the Sherrif of Bannack, as its mastermind. Plummer pulled the strings that ended in over a hundred murders and a bonanza of money and jewelry taken from unfortunate stagecoach travelers.

Eventually he was found out, and a committee of citizens formed, who called themselves the Vigilantes, and threw him into his own jail. His stay was short, just long enough for a gallows to be erected in back of the saloon and the crooked sheriff and both his deputies were soon strung up. According to historical accounts the Vigilantes were responsible for administering a particularly effective form of frontier justice, hunting down and executing twenty-four men suspected of being road agents (outlaws) over a brief four-month period.

Larin is best known for it’s Hanging Tree, where several of Plummer’s gang were hanged. The town was established around a trading post ran by the Frenchman, Jean Baptiste Laurin. Laurin’s store prospered because of the supplies carried for the miners and the furs traded with the Indians. Laurin was sometimes called Cicero, or Lorrain.

Laurin was a supply center to the rich Alder Gulch strike, which mined more than $100,000,000 in gold between 1897 and 1922. It’s said Laurin owned all the stores, bridges, and most of the ranches, cattle, horses, and mules within fifty to one hundred miles of the valley. He was also a money lender charging between twelve to thirty-six percent on unsecured loans.Jean Baptiste Laurin’s net worth is said to have been around $500,000 in 1800s money.

The site of the largest placer gold strike in world history was discovered in Alder Gulch in May 1863 by prospectors returning to Bannack after they were waylaid by Indians.

Today, Alder has a gem mine open to the public. Folks can go just south of town to search for garnets and other stones. About five miles north of the town is Robber’s Roost, an old stage stop frequented by Plummer’s Gang and other stagecoach robbers.. It is open to the public and features an antique store and museum.

A year later, Virginia City had a population of 10,000. People lived in makeshift tents and shacks, with every third construction a saloon. The gulch was named Fairweather Mining District in 1863. Exactly one year after gold was discovered, Montana was made a territory.

Virginia City because of its convenient location in the midst of the gold fields rapidly grew to become the territorial capital and ‘Social City’ of the Montana frontier.

Virginia City remains a true historical treasure. Recognized in 1961 as a National Historic Landmark, the town has seen every form of boom-and-bust cycle imaginable.

Nevada City was a mining ghost town until the Bovey family restored it between 1945 and 1978. The entire town of Nevada City is a historical museum. Today it is a famous tourist attraction with many original log buildings and an outstanding collection of old-time music boxes, player pianos and calliopes. A narrow rail system that links Nevada City and Virginia City, runs with a fully restored 1910 Baldwin Steam Locomotive on weekends and a smaller train weekdays. The trains operate from Memorial Weekend through Labor Day.

Saltese is a mining town almost on the Idaho border and named in honor of Chief Saltese, a Nez Perce leader from the area. Saltese, whose main street and railroad tracks strong out along a narrow canyon, is a supply point for the many small silver and gold mines in the nearby mountains. The town was first known as Silver City but was renamed in 1891. Even before the silver boom, the site was known to packers, trappers, and prospectors, who called it Packer’s Meadow.

The town drew many of its inhabitants with construction, its logging industry, and bootlegging. It was destroyed in a forest fire from the Coeur d’Alene forests, in 1910. Today, a number of National Forest Trails begin in Saltese.

In the autumn of 1872 the Granite mine was discovered by a prospector named Holland. The mine was relocated in 1875. This was the richest silver mine on the earth, and it might never have been discovered if a telegram from the east hadn’t been delayed. The miner’s backers thought the venture was hopeless and ordered an end to its operation, but the last blast on the last shift uncovered a bonanza, which yielded $40,000,000 in silver.

Today there is no one living in the camp. The shell of the Miners’ Union Hall still stands, but the roof supports have caved to the bottom floor. The third-floor dance hall, second-floor union offices, and ground-floor saloon/cafe are about to collapse together. The company hospital still stands.

Coloma is a couple of miles north of Garnet at the end of a trail lined with boulders. Mines near the site still remain, some containing possibly profitable deposits are sometimes mined in the summer. The structures are dated by old newspapers and mail in catalog orders from the 1920’s and 1930’s, which were commonly used as insulation in the cabin walls. Still standing are mining shafts, rusting ventilation systems, pumping machines, and the remains of narrow-gauge railroad tracks.

The history of Coloma is very mysterious. U.S. Geological survey teams described Coloma as very active in 1896 and the following years. In 1916 there was some activity, mills were installed, the survey team found that the mines were unprofitable. There was gold to be found, in veins, which appear to be small. The amount of work that was done was not typical to the amount of gold to be found. Mining records are missing, however it was estimated that $200,000 of gold ore was taken from the mines. The gold was reported to have been mined, but most of the gold was lost in tailings. The survey team aborted their research.

It is still very difficult to find any information about Coloma. Nearby residents claim they know nothing of the site, and refuse to answer any questions. Speculation has developed two conclusions: either the failures are so embarrassing no one wants to remember, or there are still discoveries to be found that no one wishes to expose.