Gordon William Lillie was born February 14, 1860, to Susan and Newton Lillie in Bloomington, Illinois. Newton Lillie owned and operated a flour mill and was considered one of the prosperous citizens of Bloomington.

Gordon, the oldest of four children (siblings Lena, Effie, and Albert), worked in the flour mill after school and on weekends. Gordon spent his free time reading dime novels about the Old West and Buffalo Bill.

After the flour mill burned down the entire family moved west to Kansas, where they had relatives. Taking what equipment survived the fire, the Lillies settled near Wellington. They built a small shanty with a dirt floor, and started farming.

They set up another flour mill to grind corn and Mrs. Lillie taught the younger children at home. She soon turned that duty over to Gordon. But Gordon still wanted to set out on his own to see the west. 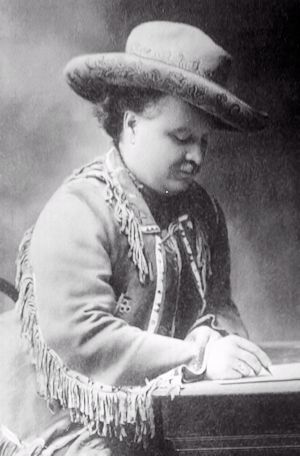 When the Pawnee Indians were being moved from their homeland in Nebraska to Indian Territory in the 1870’s, several of them made a winter camp near Wellington. Gordon spent many hours with them, learning their skills and language. He met Blue Hawk, a tribal elder, and they became good friends. At the age of 15, Gordon joined a cattle drive out of Wichita. After some misadventures in the cattle town, Gordon decided to visit Blue Hawk.

He got a job in the rock quarry and helped build the first Indian agent’s home. He went with the Pawnee on their annual buffalo hunt and learned to live among the Indians. He joined Trapper Tom McCain’s fur trading company and worked in that capacity for a time.

During the next few years, Gordon became a teacher to the Pawnee Indians and an interpreter and secretary to Major Bowman, the Indian agent.

In 1883 Buffalo Bill wrote to the Pawnee Agency asking for several Indians to travel with his newly organized Wild West Show. Six Pawnees joined Buffalo Bill’s show. Gorden was hired to go with them as an interpreter. This is how he got the nickname Pawnee Bill.

Gordon also was advised by friends of his wife’s family to start his own Wild West Show, so he began recruiting backers. He organized a grand show he called the “Pawnee Bill Wild West Show” in 1888.

His wife May, who was raised as a city girl and knew nothing about guns and horses,  performed as “Champion Girl Horseback Shot of the West.” The show went broke after the first season.

“The scenes you are about to witness are laid in Oklahoma, the home of the wily Pawnees, during the turbulent days, before the advent of the railroad and the telegraph. The actors are genuine frontier heroes who have, in many cases, participated in the occurrences which they reproduce for you today with mimic realism.” 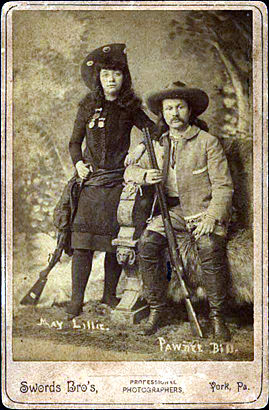 But Gordon re-organized again as a smaller production under the name  “Pawnee Bill’s Historical Wild West Indian Museum and Encampment Show” which was financially successful.

He then took the show to Europe, where it again went bankrupt. Gordon regrouped once again and the show toured Holland and entertained royalty there and in France. Upon returning to the United States, Mexican Joe became a part of the organization. The show was once again successful.

In 1901 Pawnee Bill decided he needed to expand the number and types of acts in the exhibition to compete with the many  circus companies and other wild west shows that were now  competing for the entertainment dollar.

American Indians were always an important and popular show attribute and remained his best attraction. Other ethnic groups, including “Mexicans, Gauchos, Arabs, and Cossacks,” added excitement and pageantry.

In 1902, Pawnee Bill and his wife May established the Buffalo Ranch on Blue Hawk Peak, land he had purchased from Blue Hawk. He traveled to Washington, D.C., to promote a congressional bill to develop a wildlife refuge. He also expanded his show and became serious competition for Buffalo Bill’s Wild West.

In 1907 the expanded show, “Pawnee Bill’s Wild West and Great Far East,” represented an amazing collection of performers, circus type side shows, and animals. In a 1906 show program, much emphasis was placed on the diverse ethnic groups associated with the show:

This “Mastodonic Exposition” was often called “The Ethnological Congress.” Assembling people from so many different cultures and requiring that they all work together was quite an accomplishment, considering that many of the cultures represented were currently or recently at war with on another.

At about this time Buffalo Bill’s show was having financial difficulty and in 1908 Pawnee Bill purchased one-third interest in his show. Gordon bought the remaining interest soon after and gave Buffalo Bill a partnership. They traveled together as the “Two Bill’s Show” until 1913, when the venture again went bankrupt.

The combined show ended in Denver on July 20, 1913 during the grand entry when six deputy sheriffs, one armed with a writ, entered the show grounds and informed Pawnee Bill that the entire property of the Wild West and Far East Show had been attached, including the ticket wagon with all its private papers and business records and $6,000 in cash. Buffalo Bill had continued to take out loans, many unknown to his partner.

Gordon and May had built their dream home on Blue Hawk Peak in 1910, and moved into the dwelling to begin semi-retirement. May became manager of the Buffalo Ranch while Gordon was traveling with the combined show for another 3 years.

When the traveling show was seized by debtors, Pawnee Bill Pawnee Bill returned to his home in Pawnee, where he continued business in several areas of interest.

In 1916 they adopted a child and named him Billy. During this time Pawnee Bill also opened a refinery in Yale, Oklahoma, purchased interest in a refinery in Tulsa, became interested in raising cattle, had his own movie production company located on the ranch, had his own publishing company, and was very active in civic and local affairs.

Gordon and May celebrated their fiftieth wedding anniversary in 1936. May died shortly after as a result of an automobile accident and Gordon never got over it. He was driving during the accident. Their son, Billy, had died in an accident in 1925.

Pawnee Bill spent the remainder of his days at the Buffalo Ranch. He died in his sleep in 1942. He was considered by many to be one of the last “legends” of the Old West that he loved so much.

A reenactment of the Pawnee Bill Wild West Show is held on his ranch the second weekend in June each year, and Gordon and May’s home can be toured year round. There is also a Wild West Museum on the ranch in Pawnee, Oklahoma, and a number of other tours and activities on the ranch, weather permitting,  that can be scheduled for private groups and organizations for nominal fees.