Jim Beckwourth was an African American who played a major role in the early exploration and settlement of the American West. He was an American mountain man, fur trader, and explorer.

While 1798 is generally given as the year Beckwourth was born, Elinor Wilson has made an excellent case that the year was actually 1800 in her book, Jim Beckwourth: Black Mountain Man, War Chief of the Crows, Trader, Trapper, Explorer, Frontiersman, Guide, Scout, Interpreter, Adventurer, and Gaudy Liar

.He was born to an African American slave mother and English father, Sir Jennings Beckwith. Although his father raised him as his own son, according to the law, Jim Beckwourth was still legally considered a slave.

His father appeared in open court on three separate occasions (in 1824, 1825, and 1826) and “acknowledged the execution of a Deed of Emancipation from him to James, a mulatto boy.”

Beckwourth’s family moved to Missouri in the early 1800’s, where he attended school in St. Louis for four years. He was then apprenticed to a blacksmith until age 19 to learn a trade, but ran away at the age of 18 and returned to his father’s home. 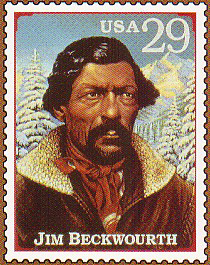 In 1824 as a young man, Beckwourth joined Gen. William Ashley’s fur trapping company as a wrangler on Ashley’s expedition to explore the Rocky Mountains. In the following years, Beckwourth became known as a prominent trapper and mountain man. He worked with the Rocky Mountain Fur Company and was an Indian fighter. He was well known for telling lore about his adventures.

On an 1826 rendezvous, trapper and colleague Caleb Greenwood told the campfire story of Beckwourth’s being the child of a Crow chief. He claimed Beckwourth had been stolen as a baby by raiding Cheyenne and sold to whites. This lore was widely believed, as Beckwourth had adopted Native American dress and was taken by some people as an Indian.

Later that year, Beckwourth claimed to have been captured by Crow Indians while trapping in the border county between the territories of Crow, Cheyenne and Blackfoot. According to his account, they thought he was the lost son of a Crow chief, so they admitted him to the nation. Independent accounts suggest his stay with the Crow was planned by the Rocky Mountain Fur Company to advance its trade with the tribe.

Beckwourth married the daughter of a Crow chief, and is said to have had at least 10 other Crow wives. One of them was the legendary Crow warrior woman known as Pine Leaf, although he left her only five weeks after the marriage.

Some accounts say he had two Blackfeet wives, but abandoned them after two weeks. There is documentation that he had at least four wives: two native American, an African American woman, and an Hispanic woman.

He narrated his life story to Thomas D. Bonner, an itinerant justice of the peace. The book was published in New York and London in 1856 as The Life And Adventures Of James P. Beckwourth: Mountaineer, Scout, Pioneer And Chief Of The Crow Nation Of Indians

. A translation was published in France in 1860.

Beckwourth’s role in American history was often dismissed by historians of the late nineteenth and early twentieth centuries. Many were quite blatant in their prejudices, refusing to give any credence to a “mongrel of mixed blood.” And many of his acquaintances considered the book something of a joke.

But Beckwourth was a man of his times, and for the early fur trappers of the Rockies, the ability to “spin a good yarn” was a skill valued almost as highly as marksmanship or woodsmanship. And while Beckwourth certainly had a tendency to exaggerate numbers or to occasionally make himself the hero of events that happened to other people, later historians have discovered that much of what Beckwourth related in his autobiography actually occurred.

While not every tale in his book is entirely accurate to what actually happened, if you are looking to discover the truth of what life was like for the fur trappers of the 1820’s, the Crow Indians of the 1830’s, the pioneers of the Southwest in the 1840’s, or the gold miners of California in the 1850’s, you can find no better source than the life of Jim Beckwourth.

In 1825, Jim Beckwourth left Ashley’s expedition and went to live among the Crow Indians for the next six to nine years, where the Crows made him a chieftain and called him “Bull’s Robe.”

In 1837 he returned to “civilization,” established two trading posts and helped to found the town of Pueblo, Colorado.

He later fought in the Seminole War in 1842 and the California Revolution in 1846. In 1848 he became General John C. Freemont’s chief scout. 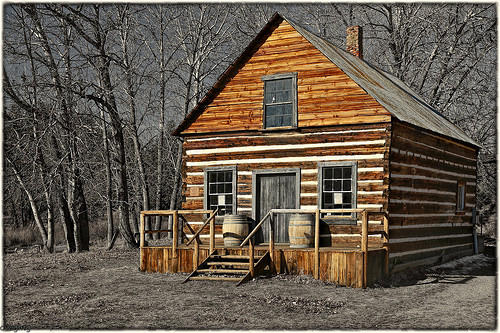 In 1850, he discovered a safer route through the Sierra Nevadas, which is now called “Beckwourth Pass.” There he built a ranch and trading post (the actual building is pictured above), which still exists today.

Beckwourth’s last adventure took place in 1866 when he fought in the Cheyenne War.

Over the years, Beckwourth’s travels took him from the everglades of Florida to the Pacific Ocean, blazing the trail in the early exploration and settlement of the American West.

He died in October, 1866 of mysterious causes while visiting the Crow Indians along the Bighorn River. There were rumors that the Crow poisoned him, but these were never substantiated.

The actual cause of death was a nose bleed that couldn’t be stopped. A few months before his death, while he was guiding a military column to a Crow band in Montana, he complained of severe headaches and suffered nosebleeds. Today, this sounds like he might have suffered from uncontrolled hypertension, (high blood pressure).

Tales of the Mountain Men: Seventeen Stories of Survival, Exploration, and Frontier Spirit