Medieval Times Dinner and Tournament is a family dinner theater featuring staged medieval-style games, sword-fighting, and jousting performed by a cast of 75 actors and more than 20 horses in each location. 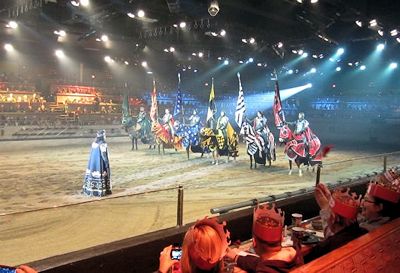 Each location is housed in a replica 11th-century castle, with the exception of the Toronto location, which is housed inside a Beaux-Arts structure built in 1912.

The music used in the show, recorded in Kiev, Ukraine, mixes an orchestra and show choir with “electric guitars and rock percussion,” with “a Russian feel.”

Before the show itself begins, a disclaimer recording is played, warning guests that the show uses strobe effects and that smoking is not allowed in the castle. 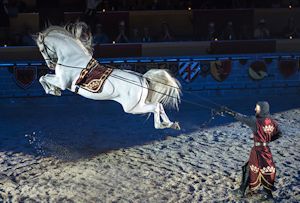 The show begins with the narration of the horse, followed by a single Andalusian stallion running in the arena (“Horse at Liberty”), guided by the master of horse. Afterwards, a light show occurs that sets the theme and also divides the two sides, the West side (Yellow, Black and White, Red) and the East side (Blue, Red and Yellow, Green).

Lord Chancellor, adviser to the king, serves as the MC for the show and comes out after the light show and introduces each of the knights of the realm as well as giving a back story to each color’s section, which represents a different city in the kingdom.

There is then the King’s Procession, where the King Don Carlos, knights, squires, and various serfs and wenches come out, and the King orders everyone to serve well the guests. The King and Chancellor then make their way to the dais, where they introduce Princess Catalina and ask their guests for a toast.

The next section, Long Reins, shows off the skills of the horses, which include the trot in place, the passage, and the Capriol.

Afterwards, the Royal Falconer comes out with a falcon and lets the bird fly around, often directly above the guest’s heads. 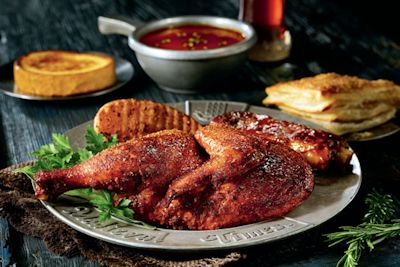 The feast is then served, which includes half a chicken (“baby dragon”), a spare rib, and a half of a potato (the bread and soup were served when guests entered the arena and the pastry is served later-a vegetarian meal is available as well).

The King’s guards then come out and display a number of choreographed maneuvers, much to the King’s surprise (the Princess ordered the guards to perform at the tournament without telling the King).

Afterwards, the Chancellor and the Princess read off names of those who decided to purchase an announcement along with their reasons for being here, which usually include birthdays or other special events.

The tournament is interrupted when the Herald of the North, sent by his king Lord Ulrick, enters in with fog and haze filling the arena, who promises Don Carlos a gift if he is allowed to return to get it. Intrigued, Don Carlos allows him to, even at the warning of the Princess of the threat Lord Ulrick has posed on other kingdoms. 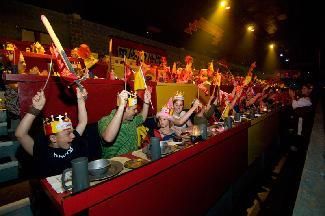 The princess gives each knight a ribbon in which they are allowed to pick one lady that will serve as the “lady of the joust.”.

Afterwards, the Chancellor alerts the king that the gift the Herald of the North promised has arrived. The gift is the Master of Horse and a skilled stallion, one of the most valuable gifts a king can send another king at that time.

The stallion and the Master of Horse proceed to do various acts (this part of the show serves as an intermission of sorts, as the knights need this time to prepare for the joust).

The Herald of the North comes out after the display with the arena once again filling with fog, and tells the king that Lord Ulrick wants to unite the two kingdoms together by marrying Princess Catalina. Disgusted and knowing of Lord Ulrick’s previous terrible dealings, Don Carlos tells the Herald to return to his king and withdraw his demand for the princess.

The next portion is the joust and fights. The knights that fight in each match and the knight that wins change in each show.

The Princess first introduces all the knights as giant nets from the ceiling come down, protecting the audience from the wooden splits from the lances and any weapons that may fly into the audience. The first match is initiated with the Chancellor choosing one knight and asking him to pick another from the other side.

The King allows, and the third match is initiated by the rival throwing a glove to the other knight (there is no joust for this one). The winner of this fight is allowed to rest for his upcoming match. 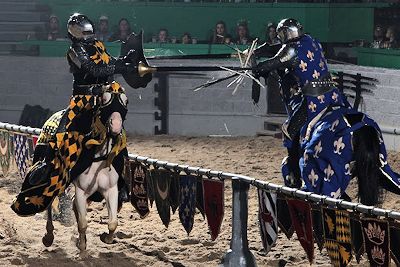 The final match is different than the other matches because there is no joust; instead, it starts with a sword fight on horseback, followed by the fight to the death on foot. The winner of the final match is named champion of the tournament, and is given a sash by the Princess to name one of the ladies from their section the Queen of Love and Beauty.

The Herald of the North interrupts this normally celebratory occasion and tells the King that he refuses to leave unless he is able to return to King Ulrick with the princess or die in battle against the knight of the King’s choosing. The King, having no choice, asks the Champion of the tournament if he will accept the Herald’s challenge, which the Champion gladly does. 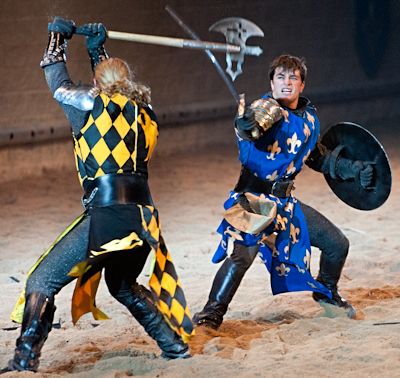 There is one last fight, and the Champion will eventually win this fight. The arena goes completely black as it fills up with fog. The lights come back up and the Herald is chained up by two squires, and the King asks the Herald to now return to his King and withdraw his request.

Refusing to go back without the Princess, the Herald says that he will rather die. The Champion knight is about to kill the Herald before the King stops him, saying that the Herald is too valiant to be slain and shall be kept in the dungeon for the rest of his life. The dungeon master pops up from underneath the fog and whips the Herald as the two squires drag him into the dungeon.

The tournament ends with one final celebration of the Champion knight, followed by all of the knights coming back out, along with the Master of Horse, the Herald of the North, and all the squires (this part serves as the final applause for the show). The Chancellor ends the show by wishing all the guests a safe trip home and expressing his hopes they will return to experience the medieval ages one more time.